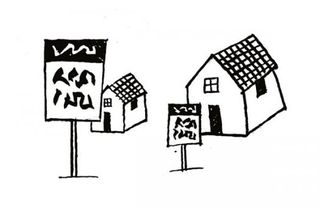 Illustration by Jeff Fisher for The Monthly.

If a property bubble pops but no one reports it, does anyone know it has happened? I wrote about the property market and real estate journalism in Australia for The Monthly in May. For the piece, I spoke to bloggers like Delusional Economics and the Unconventional Economist. If journalism is the fourth estate, these guys are the now apparently necessary fifth. They pull no punches, publish real data, unspin the sales pitches and declare their interests.

This is belated but I was reminded to post today by the (surely) world first spectacle of a highly successful reality TV series accidentally imploding in a prime time slot, while at the same time, breaking actual news.

"The Block," an Aussie show in which four couples compete to renovate and then sell a house at auction aired its finale on Sunday August 21. In previous seasons, the action on The Block has mimicked the real-life fever-dream that is the Australian real estate market of the last five+ years. Houses sell fast and high, credit is cheap, auctions make people crazy, and most people who don't yet have a house are driven by terror that they never will. Underlying all of this is the religious belief that property always goes up.

But last night The Block unintentionally revealed on national TV that property-as-pathology is over. In a crowded private auction where bidders had to pre-register (and were sworn to silence for 24 hours), only one of the four houses was sold.

One can't help but wonder what the show's sponsors and advertisers are talking about this morning. McDonalds, Mitre 10, and other companies ran ads in every break, many featuring couples from the show. What about the design companies whose beautiful furniture was featured in the houses that couldn't sell? What does it feel like to have one's products prominently displayed in such a debacle? What about the auctioneers from well-known real estate companies who stood up in front of the cameras to show off their fast-talking trade? They failed in front of three million people.

Most newspapers ran the story with a photo of the winning couple--that is, the only couple to sell a house, not the couple whose house sold for the most money. But there were surely many shots from the show that they could have used instead, pictures that told the actual story. Maybe a shot of the two sisters who barely saw their husbands or small children for weeks as they worked like indentured renovators. As their house failed at auction, their expressions went from stunned to sour. One turned to the other, either forgetting or no longer caring that she was being filmed. That, she said, was "a waste of time."